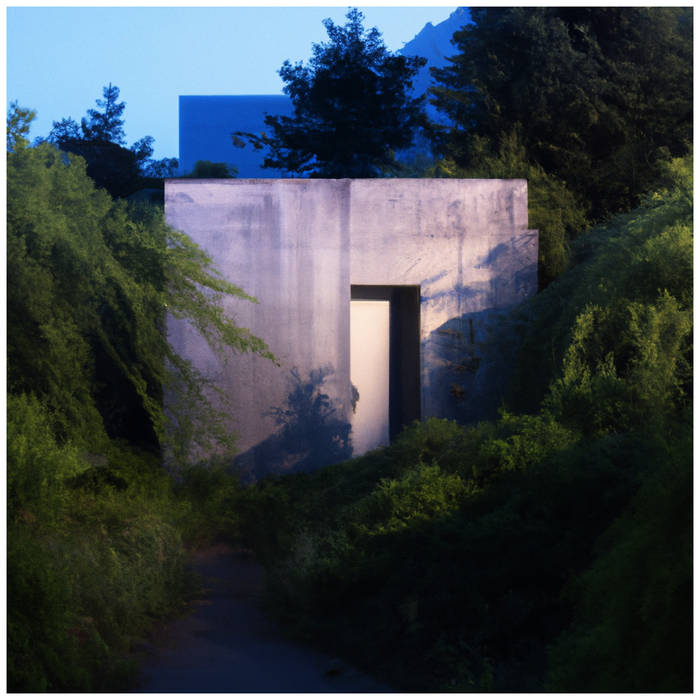 da5idh Some of the finest and most sublime of the Halifaxian Milieu for me, the murals like cave paintings, initially primal only to reveal layers with continued listening, and the tale of its genesis just as engaging. Bravo mon Capitan! Favorite track: River Mural III.

Past Inside the Present

River Mural began as an unexpected session of chordal dub forms, emanating from Behringer's reproduction of the Blue Marvin ARP 2600 analog synthesizer (operating alongside my R-EW modular system), and seven takes were recorded, each somewhat similar in terms of the patching, but distinct enough from each other to represent variations. From here, I migrated the sessions into my DAW for finer detailing and overdub work - initially planned as some basslines and drum machine programming, perhaps some FX and filtering - and very quickly, the album that sits before you now, the *real* River Mural, coalesced into being.

River Mural is something I'm proud of having done, but not for any of the usual reasons. Having just recently completed what can only be described as a months-long gauntlet of intense and exhausting composition work for The Flower to Disappear, I was certain that, as before, I'd need some time away from composed music again before being able to sit down and write anything worthwhile. Usually, this is where things like the Deep Earth and Vibratelepathos series are essential for me to explore generative and unorthodox ideas, recharging my creative batteries, so to speak, and once I've spent enough time in that method of working, I get the itch all over again, and dive back into something more programmatic and composed. River Mural defies this notion completely, being completed, start to finish, in less than one week, and so close on the heels of The Flower to Disappear, which was released on June 23rd, only two months ago. It is because of recordings like this, which come together seemingly on their own, and fast, that I am often riddled with second-guesses and doubts, asking myself whether or not I am truly happy with something, or if I'm only momentarily satisfied, and yet somehow, River Mural feels more accomplished and defined, even considering those things.

I cannot quite explain what I feel so connected to in these pieces. They feel as if they were made reactively, me going in to find the relative keys and possible melodic motifs that would harmonically work with the ARP sessions, and instead of finding something more dub techno, I found these gorgeous melodic developments, which now only serve to cast even more uncertainty on the already deeply held sense that I am not actually *making* anything, but rather, *finding* it. The title is a multifaceted one, referring topically to a mural painted on the side of a white brick building next to the Waccamaw river in Conway, South Carolina, which I passed by most every day I lived there growing up, becoming less and less the thing that it actually was - a painting of a steamboat on a building wall - and more and more some intangible piece of the fabric that made up the substance of my entire world...as much a part of the atmosphere as the temperature, or the river itself. Thematically, the name refers to my current philosophical outlook regarding creative work (and for the deep divers among you, I've penned an essay about that here: weltlandschaft.bandcamp.com/album/heaven-is-a-glass-forever-machine ) which, in summary, posits that no creative thought can ever be considered finished, that the creative act is an impulsive act of expression undertaken simply for the joy (or other emotional response) of doing so, and that in considering this, I can be free to express myself outside of any external constructs such as public expectations, format limitations and so on.

So, the River Mural is just that - an exploration of something to what seemed to be its logical terminus, only to find that where I ended up was somewhere entirely other than where I set out to go. This is so often the nature of the creative act, especially my own numerous tangents within it, and as I have continued down this path beside the river, I have become more and more content with things simply being what they already are, not pushing too hard, or trying to say something "profound" every time I hit the record button. The profundity is in the act of doing it at all, the recording is simply a document of that process having come to pass. And, as is also my usual with these passages of copy, I end up discussing so many facets of what precipitated the recordings, and hardly pay any attention to what those recordings actually sound like.

The surrealism of that element is yet another part of what makes River Mural feel unique - like Tigress, Pink Acre and Milkwhite Plastic Galaxy Maker before it, River Mural feels in parts that it is not a Coppice Halifax album at all, but rather, a Milieu album. I contemplated issuing it as I did Sun Cast - billing it as Milieu & Coppice Halifax - but in the end, it came down to percentages, and I think the greater percentage of what's here resembles CH more, but as I said above, these things can only ever be what they already are, and what they are is music made by the same one mind, two ears, two hands, two eyes, regardless of whatever organizational dividers I choose to place upon it. Perhaps, one day, there will be no escaping this, and I will simply issue all the things I record under my birthname and let aliases be damned. For now, know that I am very aware of the in-between-worlds nature of River Mural, and I enjoy that aspect of it very much.

In this way, putting the word "mural" into the title is appropriate, because it genuinely feels like the Conway mural of my youth, something more than what actuality would imply, a part of an ambient world where the only meanings and definitions that exist are those that I place emphasis on, and so that white brick wall, decorated in eroded paint by some artist whose name I still today do not know, could be all that remains now of that small town by the river, the rest of the real world simply vaporized in a flash of redundancy, cast into the sunny river waters like carefree stones, Earth to Earth, as it always is.

Many humble thanks to the members of the Milieu Music Fan Club at Patreon - patreon.com/analogbotany - and the subscribers at Deep Earth and Vibratelepathos - malfokusita.bandcamp.com / vibratelepathos.bandcamp.com - without whose support this music may not exist.